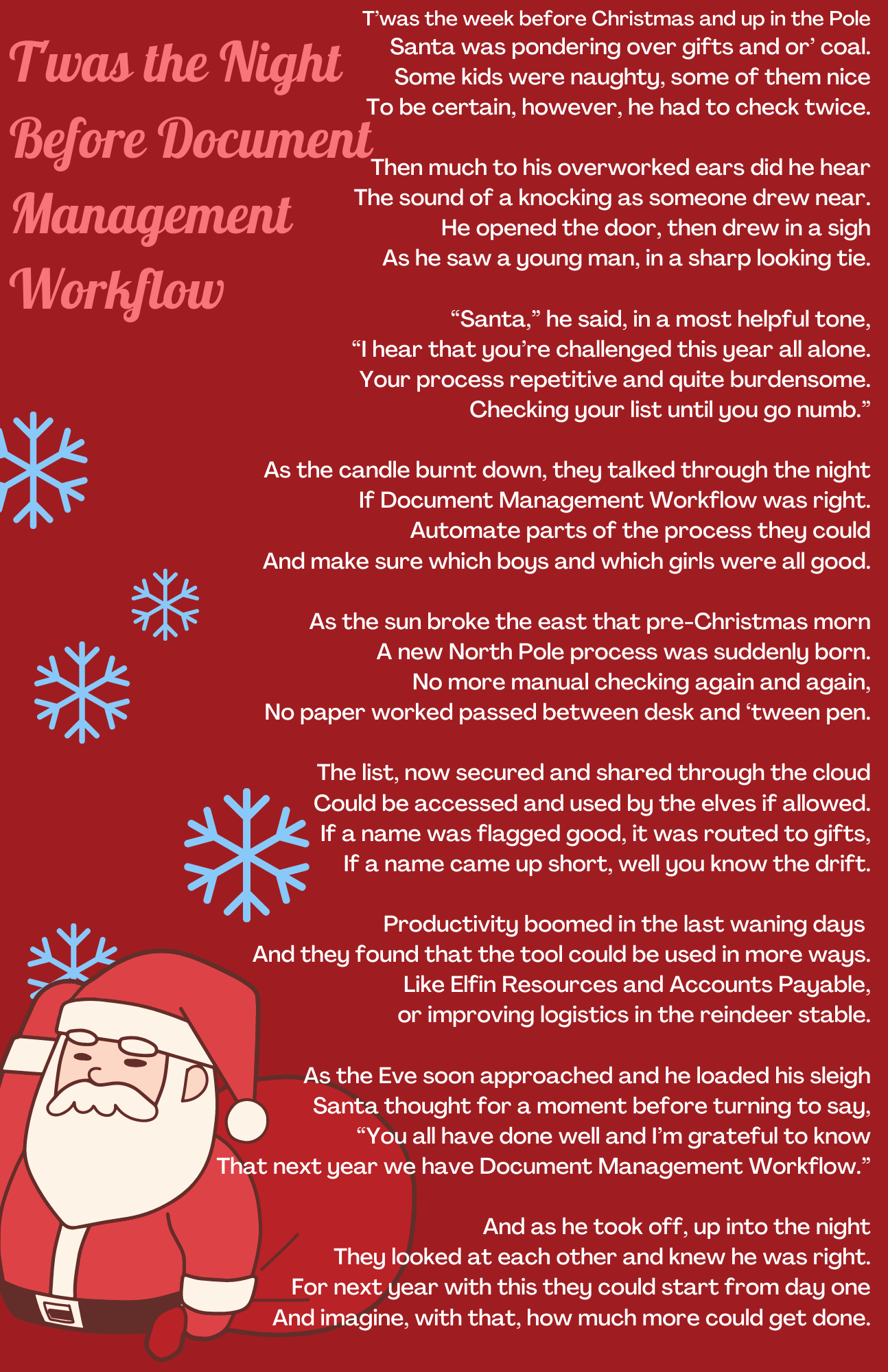 T’was the week before Christmas and up in the Pole Santa was pondering over gifts and or’ coal. Some kids were naughty, some of them nice To be certain, however, he had to check twice. Then much to his overworked ears did he hear The sound of a knocking as someone drew near. He opened the door, then drew in a sigh As he saw a young man, in a sharp looking tie. “Santa,” he said, in a most helpful tone, “I hear that you’re challenged this year all alone. Your process repetitive and quite burdensome.  Checking your list until you go numb.” As the candle burnt down, they talked through the night If Document Management Workflow was right. Automate parts of the process they could And make sure which boys and which girls were all good. As the sun broke the east that pre-Christmas morn A new North Pole process was suddenly born. No more manual checking again and again, No paper worked passed between desk and ‘tween pen. The list, now secured and shared through the cloud Could be accessed and used by the elves if allowed. If a name was flagged good, it was routed to gifts, If a name came up short, well you know the drift. Productivity boomed in the last waning days And they found that the tool could be used in more ways. Like Elfin Resources and Accounts Payable, Improving logistics in the reindeer stable. As the Eve soon approached and he loaded his sleigh Santa thought for a moment before turning to say, “You all have done well and I’m grateful to know That next year we have Document Management Workflow.” And as he took off, up into the night They looked at each other and knew he was right. For next year with this they could start from day one And imagine, with that, how much more could get done.

What Are Your Company's 2023 Resolutions?

It is about this time every year that we all start taking that deep, hard look at ourselves in a mirror and deciding how and where we ‘re going to...

I’m writing this from my very own office desk… my very first office desk! I’ve got a swivel chair, two large monitors, an endless supply of sticky...

The Great Resignation Has Created an HR Headache

The Great Resignation, that’s what they’ve been calling it.  Amid pandemic burnout, supply chain breakdown and inflation panic, Americans all over...

END_OF_DOCUMENT_TOKEN_TO_BE_REPLACED

Stay in the know

Advanced Office has been serving California for 40 years with first-rate technology and business solutions to streamline your workflow.